Inspired by the Chicago Public Library’s One Book, One Chicago, Ravinia’s One Score initiative promotes the enjoyment of classical music and creates a cultural touchstone to enable people of diverse backgrounds to engage in community-wide discussion of selected masterworks.

This year's selection is The Firebird, Igor Stravinsky’s famed 1910 ballet, which corresponds with Janni Young's latest project—and her most ambitious so far—an adaptation of Stravinksky's ballet, which brings together 14 dancers and puppeteers and dozens of custom-crafted puppets and animated objects. Co-commissioned by Ravinia, along with the Mann Center, Wolf Trap, Sun Valley Summer Symphony, Los Angeles Philharmonic, and the Saratoga Performing Arts Center, the production premiered in the summer of 2016 on a North American tour that included a July 26 stop at Ravinia, featuring guest conductor Ben Gernon and the Chicago Symphony Orchestra performing the score.

This year’s One Score selection is the quintessential American opera Porgy and Bess, composed by George Gershwin, which tells the story of a crippled man and a woman trying to escape the influence of a former boyfriend and the love that develops between them. A master of popular song, Gershwin also had a gift for melody that resulted in such enduring works as Rhapsody in Blue and An American in Paris, but in Porgy and Bess he combined those talents to create a full-scale opera based on African-American folk music. In its time, however, this was not without controversy. Explore Porgy and Bess’s convoluted path to prominence in Ravinia’s One Score resource guide, and don’t miss the performance by the Chicago Symphony Orchestra, led by Bobby McFerrin.

This year’s One Score selection is the score created by Academy Award-winning composer Howard Shore for The Lord of the Rings – The Return of the King. Films scores have been a port of entry to the realm of symphonic music ever since Hollywood started commissioning musical accompaniment by established composers and putting full orchestras at their disposal. Discover how Shore’s artistry has helped bring Middle-earth to vivid life!

This year’s One Score selection is the grand opera Aida, one of the most beloved scores by operatic genius Giuseppe Verdi, whose 200th birthday is being celebrated this year. Aida tells of an explosive love-triangle in ancient Egypt, set to a score celebrated for its ravishing emotional intimacy as well as sonically spectacular “grand opera” pageantry. 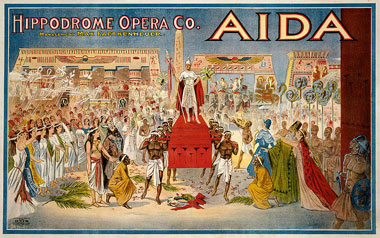 Ravinia’s One Score, One Chicago introduces thousands of public school students to classical music through the study of a selected work each year. This year’s selection, Giuseppe Verdi’s grand opera epic, Aida, was explored by children in hundreds of classrooms throughout the Chicago area through live performances, school residencies and teacher workshops.
Click here to learn more.

This project is supported, in part, by an award from the National Endowment For The Arts.