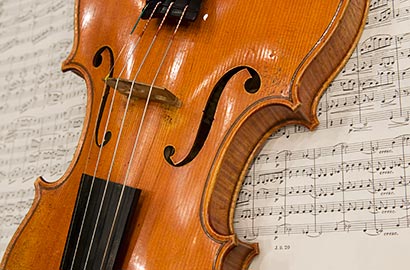 This violin created by Carl Becker in 1949 is part of the Steans Instrument Bank.

In its continuing mission to nurture the next generation of performing artists, the Ravinia Festival maintains an instrument bank through which it lends high-quality instruments to selected young professionals accepted into Ravinia's Steans Music Institute.

The first instrument acquired by the collection is a 1949 Carl Becker violin, which was presented to Ravinia in the fall of 1998 by the late Joseph Bernstein of Glencoe, the founding donor of the Instrument Bank. Other violins are a 1778 Joseph and Antonio Gagliano instrument; one handcrafted by Joannes Tononi of Bologna, dating from circa 1690; and one made by Eugenio Degani of Venice, dating back to 1891. 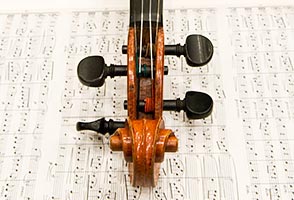 “Something glorious happens when you can match an extraordinary instrument with a truly gifted young performer. It’s exponential. With these instruments, students discover new depth to the music and climb to new heights on stage,” said Welz Kauffman, then president and CEO of Ravinia Festival. “These young performers have already dedicated their lives to an art form that enriches us all; the least we can do is give them the tools they need to succeed in a competitive field.”

The need for an instrument bank was recognized at the end of Ravinia’s 1996 season when world-renowned violinist and Ravinia's Steans Music Institute Program Director Miriam Fried reported that some of the young string players who won admission to the Institute could not afford quality instruments on which to develop their talents. Earlier that season, Mr. and Mrs. Richard Cohn had expressed an interest in providing a better violin for the recipient of their scholarship. Supporters of the Steans Music Institute immediately began discussions on how to formalize an instrument-lending program, and the Cohns were among the first to contribute to it.

Gifts for the instrument bank have come from The Barbara, Patricia, and Richard Cohn Family Foundation; Mrs. Irl H. Marshall, Jr., a Ravinia Life Trustee and member of the Ravinia Festival Women’s Board; Brooke Kolar, a member of the Ravinia Festival Women’s Board; The Ruwitch Family, in memory of Robert S. and Shirley Ruwitch; The Stepan Company, through John Stepan, a Ravinia Festival trustee and Ravinia's Steans Music Institute Committee member; a gift from the Dr. Scholl Foundation; an anonymous foundation gift; and a matching grant from The Helen F. Whitaker Fund.  The instrument bank is now complete unless additional contributions of funds or instruments are received.

“It is a pleasure to be able to offer one more means of support to our talented young artists who bring so much to the Festival each summer and take the name of Ravinia around the world when they leave. The string player needs a beautiful instrument in order to grow as an artist, and we hope that a two- or three-year loan of one from Ravinia's Steans Music Institute will nurture that growth,” said Diane Dorn, then director of Ravinia's Steans Music Institute. “A number of supporters from the Ravinia Family, with their usual understanding and generosity, have embraced this cause.”

For a unique and lasting gift in the name of your loved one, consider giving to the Tribute Fund to support our music education programs.