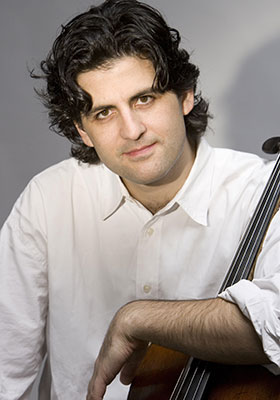 Following his Alice Tully Hall debut, the New York Times praised Amit Peled’s “glowing tone, seductive timbre and emotionally pointed approach to phrasing that made you want to hear him again.” Those who did want to hear him again might have been as moved by his album Cellobration as was Fanfare Magazine: “His technical prowess . . . and his tone, of pellucid purity, gleams with a glint of gold”; many pieces from that critically acclaimed album will be featured on his Ravinia debut program.

Beethoven composed three sets of variations for cello and piano and the two Op. 5 cello sonatas during his first decade in Vienna. The last two sets of variations were based on themes from Mozart’s 1791 Singspiel, Die Zauberflöte (“The Magic Flute”). In 1796 Beethoven wrote 12 variations on Papageno’s aria “Ein Mädchen oder Weibchen” (“A Maiden or Little Wife”), a collection that was published in 1798 as Op. 66. In 1801 he followed with another set of variations based on the duet between Pamina and Papageno, “Bei Männern, welche Liebe fühlen” (“Among Men Who Know the Feeling of Love”). Beethoven dedicated these variations to the Count Johann Georg von Browne—a patron and dedicatee of the Three String Trios Op. 9. He published the score in Vienna the following year without an opus number (it is now identified as WoO, or “Werke ohne Opuszahl,” 46).

Brahms’s Sonata No. 2 in F Major, Op. 99, exudes a dramatic Romanticism in its harmonic boldness, high-lying melodies and the breadth of its four movements. Brahms composed the Cello Sonata No. 2—along with the Violin Sonata No. 2 and the Piano Trio No. 3— during his summer retreat at Hofstetten on Lake Thun in 1886. Cellist Robert Hausmann joined Brahms in the first public performance in Vienna on November 24, 1886.

The Allegro vivace bursts forth with a passionate, even heroic cello theme and tremolo accompaniment. A second, equally forceful melody does little to lessen the tension. Brahms turns to the unusual key of F-sharp major in his Adagio affettuoso; this movement presents two expressive themes and occasional cello pizzicatos, an uncommon effect for the composer. The Allegro passionato, although not so entitled, is a scherzo in three parts. Brahms’s final movement, somewhat lacking in the dramatic weight of the earlier movements, features a refrain-like theme heard several times throughout.

Unlike Schubert and Schumann, who raised the piano accompaniment to a level of poetic and dramatic expression equal to the voice, Mendelssohn generally preferred a direct, melodious text presentation with a subordinate keyboard part. In instances when the piano goes beyond a simple chordal function, Mendelssohn reinforced the emotional atmosphere instead of devising obvious musical characterization. Pure lyricism of this type transferred with ease to the Songs without Words for solo piano.

In 1837 Mendelssohn released his Six Songs Op. 34, including Auf Flügeln des Gesanges (“On the Wings of Song”), which could be the composer’s motto and which was, in fact, the title of a biography by Wilfrid Blunt.

The prominent Czech cellist and composer David Popper was born in Prague, the son of a local cantor. In 1863 he attracted the attention of conductor Hans von Bülow, who lavished praise on his “excellent tone, tremendous technique.” Bülow invited Popper to become principal cellist of the Vienna Court Orchestra. He was appointed professor at the Royal Conservatory in Budapest in 1896, a position he retained until his death. Popper published over 70 of his own compositions, the majority of which were for the cello, and two tutorials on cello playing. The Tarantella Op. 33 is Popper’s refreshing rendition of the Italian folk dance that, according to the now largely debunked legend, was used to cure the toxic effects of a tarantula spider bite.

Scottish poet and novelist Sir Walter Scott was greatly admired on the continent as an unsurpassed Romantic. Franz Schubert set 10 German translations of his poems. “Ave Maria! Jungfrau mild!” (“Hail Mary! Maiden mild!”)—the third of three “Ellen’s Songs”—tenderly interprets Scott’s devotional text from Canto III of The Lady of the Lake. The original text bore no resemblance to the Latin devotional text, aside from the opening and closing words of each verse—“Ave Maria” (“Hail Mary”).

The Georgian musician Sulkhan Tsintsadze began his career as a cellist, later refocusing his exhaustive knowledge of string instruments on composition. Tsintsadze became a faculty member at the Tbilisi Conservatory in 1963, and two years later was named its rector. Widely heralded for his contributions to Georgian music, Tsintsadze received numerous state and national awards including the State Prize of the USSR (1950), Zakharia Paliashvili Prize (1974), Shota Rustaveli State Prize (1981) and recognition as a People’s Artist of Georgia (1961) and the USSR (1988).

Tsintsadze’s original music integrated elements of Georgian folk music and culture with Western compositional techniques. Even the increased chromaticism and complexity of his later works coexisted with the traditional modes and stringent harmonies typical of Georgian music. The Five Pieces on Folk Themes (1950) for cello and piano find Tsintsadze at an early stage of development as a composer. These scenic pieces depict peasant life through authentic folksongs, such as “Sachidao” (a type of wrestler’s song), or the sonorities of traditional instruments, such as the plucked four-string instrument known as the Chonguri, which is imitated by the unaccompanied cello.

Eminent Spanish composer and pianist Enrique Granados drew inspiration for his most popular piano collection, Goyescas: Los majos enamorados, from the paintings and tapestries of Francisco José de Goya y Lucientes (1746- 1828). Goya was celebrated for his portraits of the Spanish royal family and for his startlingly vivid renditions of atrocities committed during the War of Independence in 1808. The composer originally conceived his Goya project in 1898, but his specific ideas changed frequently over the next several years. “In 1909 I came back to them, giving them the form of a piano suite. The idea that I kept in mind as the moving force behind the music was Spain in an abstract sense, as a concept of particular elements of my country’s life and character. Coinciding with this was a constant awareness of the human types and scenes portrayed by Goya.”

Granados named each piece in Goyescas after a work of Goya. The subtitle translates as “the majos [members of fashionable society] in love.” He grouped these half-dozen masterpieces into two books, completed and premiered respectively in 1911 and 1912.

Bach intended this four-movement organ composition for one of Leipzig’s Christmas liturgies. Its music incorporated many aspects of the late- Baroque “pastoral” style associated with the bucolic Nativity scene, as did Handel’s Messiah, Corelli’s Christmas Concerto and Bach’s own Christmas Oratorio, among countless examples. Triplet rhythms in the Prelude, Aria and Gigue reflect one typical “pastoral” style trait; the Allemande’s syncopations offer a different type of rhythmic vitality. The first two movements also contain hints of the shepherd bagpipe (piffaro) music—with its drones, simple harmonies and melodic duets—associated in Italy with the Christmas procession of gifts. Bach built the concluding gigue-fugue on an embellished version of “Joseph lieber, Joseph mein,” a traditional Christmas lullaby based on the Latin hymn melody “Resonet in laudibus” fitted with a German text by Johann Walter (1544).

Steven Spielberg’s most serious and thoughtprovoking film to date, Schindler’s List garnered seven Oscars. Catholic businessman Oskar Schindler earns profits from his factory in Krakow by exploiting the Jewish workers. As Schindler comes to see (and experience) the heinous racism of the Nazis, he shelters greater numbers of Jews on his list of employees. To more than one thousand survivors of the Holocaust, “the list is life.” The Academy of Motion Picture Arts and Sciences awarded the 1994 Oscar for Best Original Score to John Williams for Schindler’s List. He also received the BAFTA Film Award (1994), a Grammy Award (1995) and a nomination for a Golden Globe Award (1994).

Dubbed the “Tsar of cellists” by Peter Ilyich Tchaikovsky, Karl Davidov was perhaps the most influential cellist of the late 19th century. In 1858 Davidov entered the Leipzig Conservatory for composition studies with Moritz Hauptmann. Little time passed before his performing abilities gained the attention of prominent local musicians, notably violinist Ferdinand David and pianist (and conservatory director) Ignaz Moscheles. Davidov soon made his solo debut performing his own B-minor cello concerto with the Gewandhaus Orchestra. When cellist Friedrich Grützmacher left Leipzig for Dresden in 1860, Davidov succeeded him as the orchestra’s principal cellist and professor of cello at the Conservatory.

Returning to Russia two years later, Davidov became a faculty member at the St. Petersburg Conservatory, principal cellist of the Imperial Italian Opera and, at the invitation of violinist Leopold Auer, cellist of the Russian Musical Society String Quartet. The Conservatory selected Davidov over Tchaikovsky as director in 1876, a position he lost to Anton Rubinstein 11 years later. A proficient composer—with an understandable preference for the cello— Davidov wrote four cello concertos; a Fantasy on Russian Themes, Allegro de concert and Ballade for cello and orchestra; a string quartet, string sextet and piano quartet; and miscellaneous smaller compositions, among them Four Pieces for Cello and Piano, Op. 20, which includes his most familiar work, Am Springbrunnen (“At the Fountain”). He also authored an important cello treatise, Violoncell- Schule (1888).

Davidov received his red-orange Antonio Stradivari cello (1712) as a gift from the Russian count Mateusz Wielhorski in 1870. Almost a century later, Ismena Holland purchased the instrument for her immensely talented goddaughter, English cellist Jacqueline du Pré, who performed and recorded on it until 1970. Since du Pré’s death in 1987, the cello has been owned by LVMH Moët Hennessy – Louis Vuitton and is currently on loan to Yo-Yo Ma.

Please be aware that there is also a Pavilion concert on this evening which may result in increased traffic. Free parking may be accessed via the Blackstone entrance to the West Lot (Blackstone is the extension of Clavey Road east of Green Bay Road). Please display parking pass provided, or your concert tickets.