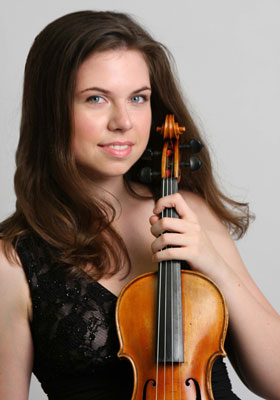 Named Musical America’s “New Artist of the Month” in August following her victory at the 2012 Walter W. Naumburg International Violin Competition, Tessa Lark has been praised for her “powerful sound even in the most ethereal upper reaches of harmonics and ordinario.” (Boston Music Intelligencer) The RSMI alumna holds bachelor and master of music degrees in violin performance from the New England Conservatory of Music, where her teachers included Lucy Chapman and RSMI faculty members Miriam Fried and Paul Biss. Lark has also taken top honors in the Johansen (2006), Irving M. Klein (2008) and Michael Hill (2009) international competitions, and previously toured Europe and Asia as the concertmaster of the Cincinnati College-Conservatory of Music’s preparatory Starling Chamber Orchestra until 2006. She has twice been featured on NPR’s From the Top and performed with orchestras from Beijing to Santa Cruz, where the Santa Cruz Sentinel described her “amazing agility” and “silken smoothness” as “Lark spun out every note [of the Tchaikovsky violin concerto] with precision and musicality.” The Santa Cruz Weekly similarly praised her ability to “turn circumspect and thoughtful . . . yet, when high-flying pyrotechnics demanded it, she ignited fireworks.”