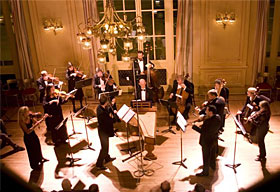 In Honor of the 250th Anniversary of Handel’s Death

Founded by British Baroque violinist Garry Clarke, Baroque Band is an orchestra committed to historically informed performances played on period instruments. The orchestra debuted in Chicago in May 2007 and went on to launch its inaugural season in October 2007, during which it gave more than 30 performances throughout the city and shared its passion for Baroque music with a diverse and ever-increasing audience. The orchestra’s own subscription concerts were presented at Chicago’s Symphony Center, the Music Institute in Evanston and at the University of Chicago’s Rockefeller Memorial Chapel in Hyde Park. Baroque Band also performed on both the Sunday Salon Series and the Dame Myra Hess Memorial Concert Series at Chicago’s Cultural Center; at Illinois College in Jacksonville, as part of the Byron Colby Barn Series in Grayslake; and at the 2008 Madison Early Music Festival. In recognition of its achievements, in the summer of 2008 Baroque Band was named the resident ensemble of 98.7 WFMT radio, giving audiences throughout the world the opportunity to hear the orchestra’s performances. In addition, Baroque Band is ensemble-in-residence at the Music Institute of Chicago and artistic partner of Rockefeller Memorial Chapel, positions it has been honored to hold since its debut season. As educational partners with the Music Institute of Chicago, members of Baroque Band have helped to establish a strong early-music program including individual coaching, chamber groups, a student baroque orchestra and viol consort, and a summer Baroque institute. In the summer of 2008 Baroque Band recorded its first disc, Biber’s Mensa Sonora, which is being released on the Cedille label this year. Tonight marks Baroque Band’s Ravinia Festival debut.