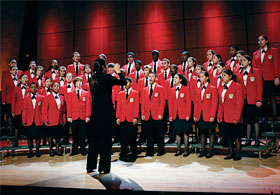 Under the direction of Josephine Lee, the internationally-acclaimed, Emmy Award-winning Concert Choir presents its final performance of their season at Ravinia. Experience incredible breadth of repertoire for which the Choir is renowned, including world, Latin and gospel music, Vivaldi’s Gloria, a Beatles medley and a commissioned work by young composer and Chicago Children's Choir alum, Mitchell Owens.

Join us early at 3 p.m. for the family event of the summer! Enjoy free family activites, moonjumps and cooking demonstrations for kids before the concert begins.

Founded in 1956, Chicago Children’s Choir is a multiracial, multicultural choral music education organization that allows children to begin singing at an early age and continue through high school. Currently there are nearly 3,000 participants in the choir program. Also active in Chicago’s schools, the choir has a tuition-free program that operates in 48 schools in the area, providing more than 2,100 children with classroom training in basic music theory and choral performance. The choir also has an after-school program that provides training to approximately 500 children. As an international touring ensemble, the choir has performed throughout the United States (including their 2002 New York debut at Carnegie Hall), Russia, Japan, Italy, Ukraine, Canada, South Africa, Korea and Great Britain and has been featured in nationally broadcast television and radio performances. The Concert Choir component of Chicago Children’s Choir is a 90-voice group of advanced singers from ages 9 to 18. They have performed for a number of dignitaries, including President and Mrs. Clinton at the White House, Nelson Mandela, the Dalai Lama and Archbishop Desmond Tutu and have appeared with the Chicago Symphony Orchestra, The Joffrey Ballet and the Lyric Opera of Chicago. The choir released Songs on the Road to Freedom in 2008, featuring music from and inspired by the Civil Rights Movement. Chicago Children’s Choir has appeared at Ravinia 24 times since their 1965 festival debut. Recent Ravinia highlights include A Midsummer Night’s Dream (2001), The Romeo and Juliet Project (2002), John Adams’s El Niño (2003), performances with Ladysmith Black Mambazo (2004) and Wycleff Jean (2005), Verdi’s Otello (2005), Mahler’s Symphony No. 3 (2006) and Symphony No. 8 (2004 and ’08). In September they will participate in the world premiere of Bill T. Jones’s Fondly Do We Hope . . . Fervently Do We Pray.

Born in Chicago to parents of Korean descent, Josephine Lee started violin lessons at the age of 3, piano at the age of 4 and conducting at the age of 15. She received her bachelor’s degree in piano performance from DePaul University and a master’s degree in conducting from Northwestern University. Among her honors are the 1995 Union League Civic and Arts Foundation Award in piano, second prize at the 13th annual Chicago Chopin Piano Competition and finalist ranking in the National Chopin Competition in New York. In 2002 she became the first recipient of the Robert Shaw Fellowship from Chorus America. As artistic director of the Chicago Children’s Choir, she defines the artistic vision for all of their programs and is principal conductor of the Concert Choir. Earlier this year she led the choir in concert at the Lincoln Memorial in Washington D.C. with Denyce Graves and Sweet Honey in the Rock, honoring the 70th anniversary of Marian Anderson’s historic concert at that site. A frequent guest conductor for workshops and festivals around the world, Lee has led concerts and master classes in Austria, the Czech Republic, Germany, South Korea, Thailand, Canada and Japan. More than a choral conductor, Lee has also conducted the Chicago, Lyric Opera, Grant Park and Oregon symphony orchestras. She also co-created an epic work of musical theater, Sita Ram, nominated for three 2006 Jeff Equity Awards. In 2006 Josephine Lee was recognized as a “Chicagoan of the Year in the Arts” by the Chicago Tribune, in 2007 was honored as a “Distinguished Musician” by The Union League Club of Chicago and in 2008 received the 3Arts Artist Award.

Judy Hanson holds a bachelor of science degree in music education from the University of Illinois and a master of music degree in music education from Northwestern University. As director of choral programs for Chicago Children’s Choir, Hanson directs training and curriculum guidance for the conductors of the in-school and after-school Neighborhood Choir Programs. She is the conductor of DiMension, a choir for young men with changing voices; the associate director and choreographer for the Concert Choir; and conductor and choreographer for the Show Choir. She received a 2006 Jeff Award nomination (Choral Choreography) for Chicago Children’s Choir’s original world musical, Sita Ram. A nationally known clinician, adjudicator and conductor, Hanson has presented sessions and workshops at ACDA chapters in Illinois, Iowa, New Jersey and Pennsylvania and at many universities. She has judged national show choir competitions and conducted choirs at Illinois Summer Youth Music at the University of Illinois, Show Choir Camps of America, IMEA High School District Festivals and Junior High/Middle School Honor Choirs for the ACDA. In February 2000 she served as the Junior High/Middle School Honor Choir conductor at the ACDA Eastern Division Convention in Baltimore. In February 2008 she conducted the New Jersey High School Women’s Honor Choir and has served as the Junior High/Middle School Repertoire and Standards Chair for Illinois ACDA. In 1993 Hanson received the Golden Apple Award for Excellence in Teaching, an award given to 10 outstanding Chicago area teachers each year. From 1985 through 2001 Hanson was the director of vocal music at Eisenhower Junior High School in Darien, Illinois, and from 1987 through 1993 she was one of the directors of Young Naperville Singers Children’s Chorus.