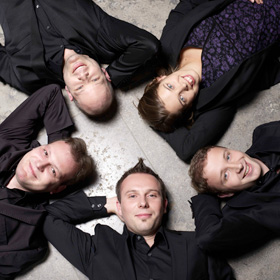 Founded in 1999 in Germany, Calmus a cappella quintet embodies the rich choral tradition of its hometown of Leipzig. Calmus captivates both audiences and critics with its charming stage presence, flawless technique and entertaining presentation. Comprising graduates of Leipzig’s renowned St. Thomas Church Choir School, Calmus offers the unique combination of a pure soprano voice with four male voices ranging from bass to countertenor. The seamless blend of these five voices lends itself to the almost limitless range of music the ensemble offers. Calmus conveys everything they perform with great respect, and also with a sense of joy in singing that is obvious to the listener. With no less than 10 recordings to its credit, Calmus received the 2009 Echo Klassik Award for Lied:gut!, a disc of treasured German folksongs. The group‘s latest CD, Hausmusik, is a collection of songs by Robert and Clara Schumann and J.S. Bach, featuring a program that very well could have been heard at a salon concert in the Schumann home. This album followed the 2009 release of the Calmus Christmas Carols album in late 2009, its first CD of music for the Holidays which has been described as “perfectly balanced ensemble singing” with “every note, every chord given exacting importance” and “delivered in the most vocally attractive, musically expressive style” (Classics Today). An active concert schedule worldwide has already taken Calmus across Germany, Austria, Belgium, Switzerland, France, Ireland, Spain, Portugal, and North and South America. The group’s festival appearances include International A Cappella Week in Hannover and the Schleswig-Holstein Festival, where the group attended a master class with The King’s Singers. In addition to garnering first prize and numerous performance prizes at the CAG Competiton, other prestigious awards bestowed upon the ensemble include first prizes at the fourth annual Robert Schumann Choral Competition, the International Competition for Vocal Ensembles in Finland and the 37th Tolosa Choral Contest in Spain.