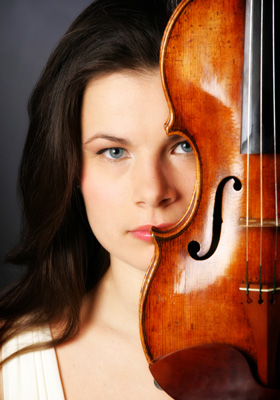 Born in Pleven, Bulgaria, in 1985, Bella Hristova began violin studies at age 6. At 12 she participated in master classes with Ruggiero Ricci at the Mozarteum in Salzburg. Since the age of 13 she has lived in the U.S. In 2003 she entered The Curtis Institute, where she worked with Ida Kavafian and studied chamber music with Steven Tenenbom, and in 2007 and ’08 was a participant in Ravinia’s Steans Music Institute. She studied with Jaime Laredo at Indiana University, receiving her artist diploma in 2010. As first-prize winner of the 2007 Michael Hill International Competition in New Zealand, she made a concert tour of the country and recorded a CD of solo violin works by Charles de Bériot for the Naxos label. First-prize winner of the 2008-09 Young Concert Artists International Auditions, she made her debut in the Young Concert Artist Series during the 2009-10 season at New York’s Merkin Concert Hall and at Washington’s Kennedy Center. Additional awards include the Helen Armstrong Violin Fellowship, the Miriam Brody Aronson Award, the Ruth Laredo Memorial Award, the Candlelight Concert Society Concert Prize and the Lied Center of Kansas Concert Prize. Last season she performed at the Santa Fe Chamber Music Festival and the Cartagena Festival Internacional de Musica, and in recital at Boston’s Isabella Stewart Gardner Museum. She has performed as soloist with the Owensboro, Johnstown, DuPage and Indianapolis symphonies, and her 2010-11 season included a performance of Bach’s Concerto for Two Violins in D Minor with Pinchas Zukerman and the Orchestra of St. Luke’s at New York’s Lincoln Center, and solo appearances with the Lafayette, West Michigan, Altoona, Monroe, Fort Smith, Vermont, Westmoreland, Grand Rapids and Vallejo symphonies.

Q&A with Bella Histrova
Q: What is your favorite movie of all time?
A: Pixar's Up

Q: What would be the most difficult thing for you to give up?
A: My hearing

Q: If you could have dinner with any three famous people (living or dead), who would they be?
A: Beethoven, my dad (he was a well-known Russian composer and I never knew him before he passed away) and Katee Sackhoff (I'm a huge Battlestar Galactica fan)

Q: Is there anything you miss from before you were famous?
A: I don’t think of myself as famous, but if I were to put myself in a famous person’s shoes, I’d miss my privacy.

Q: What will you hope to be doing a year from now?
A: I hope to be a dog owner by then, but I know that it’s probably not going to happen. I'm away from home too much.

Q: Do you have an annoying habit?
A: I’m a bit of a perfectionist. I like to knit, and if I mess up just one stitch and don’t catch it in time, I have to go back and start over.

Q: What do you do to wind down after a performance?
A: Have a glass of wine or a cocktail (and dinner, of course)

Q: What is the best compliment you ever received and from who?
A: Anytime I see that someone is moved by a performance I played, it’s a pretty big compliment.