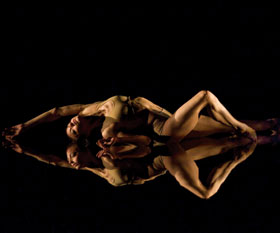 In its “Transformer”-like performance of visual illusions and physical mutation, Momix continues a tradition of theatrical dance dating back to the late 19th century and continuing in the 20th with such ensembles as Mummenschanz and Pilobolus. (Moses Pendleton, a founding member of Pilobolus, formed Momix in 1981.) Based on the unfolding of the seasons, their show Botanica embodies Maurice Maeterlinck’s famous description of a flower that “strains its whole being in one single plan: to escape above the ground from the fatality below . . . to enter a moving, animated world.” It’s a magical world you’ll want to join!