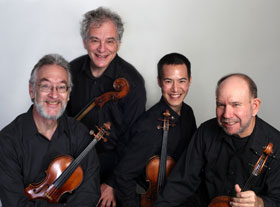 These three string quartets span the history of perhaps the most pristine form of instrumental ensemble from Haydn, who virtually created the genre as we know it, through Beethoven’s imposing six-movement Opus 130 (which will be performed with its original “Grosse Fuge” finale, described by Beethoven scholar Joseph Kerman as “transcendent”), to Pulitzer Prize-winning American composer Donald Martino, who wrote his Quartet No. 5 the year before his death in 2005. A student of Roger Sessions, Milton Babbitt and Luigi Dallapiccola, Martino composed in a lyrical style that belied his use of his teachers’ 12-tone procedures. The members of the legendary Juilliard String Quartet “show a shared understanding of the music they play; every bow stroke adds to its meaning and its integrity.” (Chicago Tribune)