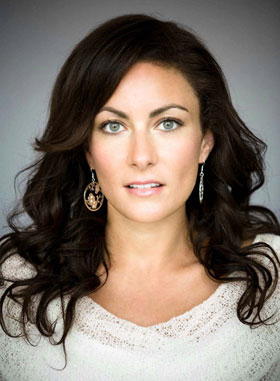 Laura Benanti first conquered Broadway at the age of 18 as Maria in The Sound of Music opposite Richard Chamberlain. She earned the 2008 Tony, Drama Desk and Outer Critics Circle awards for her portrayal of Gypsy Rose Lee in Gypsy opposite Patti Lupone and recently starred in Women on the Verge of a Nervous Breakdown at Lincoln Center, where she also starred last year in Sarah Ruhl's In the Next Room or The Vibrator Play. Earlier that season Benanti also demonstrated her comic flair in the Public Theater’s production of Christopher Durang's Why Torture Is Wrong And The People Who Love Them. She earned nominations for Tony, Drama Desk and Outer Critics Circle awards for her performance of Cinderella in Stephen Sondheim’s Into The Woods and a Tony nomination for her appearance in Swing! She also starred opposite Antonio Banderas as his muse in the celebrated revival of Nine. Additional credits include Perdita in A Winter’s Tale at the Williamstown Theater Festival, Anne in A Little Night Music for the L.A. Opera and Eileen in the City Center Encores production of Wonderful Town.

Benanti, who has made  numerous recordings and premiered her solo show at the Kennedy Center in 2010, most recently starred in the CBS comedy pilot Open Books. Other television credits include her portrayal of Billie on FX’s controversial comedy Starved, a recurring role on ABC's one-hour dramedy Eli Stone, and her appearance as Michael Imperioli's wife on ABC's Life on Mars. She made her 2005 film debut in Take The Lead and can also be seen in Falling For Grace  and Meskada, which premiered at the 2010 Tribeca Film Festival.