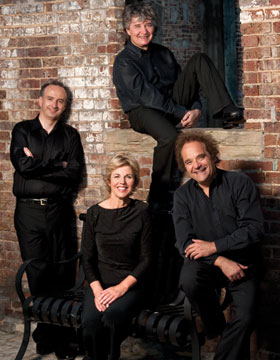 Though some mystery surrounds Mozart’s personal life at the time of the composition of his K. 575 Quartet, its player-friendly tunefulness and prominence mark it as intended for King Friedrich Wilhelm II of Prussia, himself an amateur cellist. The works by Mendelssohn and Beethoven were composed only one year apart; Beethoven’s massive Opus 131, completed less than a year before his death, boasts no fewer than seven movements. Mendelssohn’s second quartet, an unusually passionate work by the composer, shows a musical indebtedness to the musical titan who had passed a mere five months earlier, especially in its use of a song motive, similar to Beethoven’s final quartet.