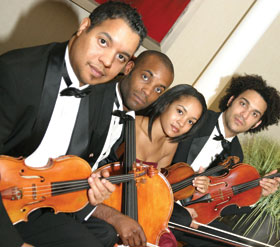 Misha and Cipa Dichter and The Harlem String Quartet

Although world records in athletic events have been routinely broken with the passing of time, the level of keyboard virtuosity attained by Franz Liszt in the 19th century has never been—and probably never will be—surpassed. Husband-and-wife piano team of Misha and Cipa Dichter together will tackle two of Liszt’s works arranged for two pianos, including the iconic symphonic poem Les préludes, which listeners of a certain age will instantly recognize as the theme music of the old “Flash Gordon” movie serials. Misha then takes center stage for some of Liszt’s incomparable solo works and is joined by the Harlem String Quartet for Schumann’s grand Piano Quintet, the work that created a rift between Schumann and Liszt, when the latter criticized the work as “too much in the Leipzig manner”—a reference to the division between the progressive composers of theWeimar school and their more conservative colleagues.