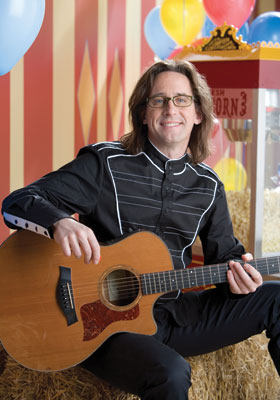 Ralph's World is a real rock'n'roll concert for the whole family featuring a musical foursome led by creator Ralph Covert. This Grammy-nominee has eight albums on Disney, the newest All Around Ralph's World on BarNone, over a dozen music videos, four books for kids, and several successful children's musicals since Ralph's World's creation at The Old Town School of Folk Music a decade ago. It's built on the aesthetic foundation that encourages dancing and singing along just like his longtime indie rock band The Bad Examples, which notably has a new smash record out this year, but with lyrics that matter to the kindergarten crowd.