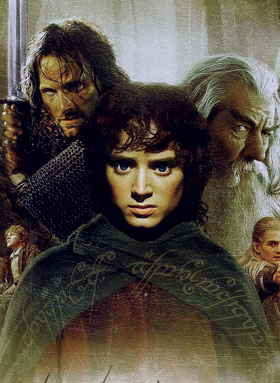 Compare: our price is less than half that of other venues with this show; and we have the CSO!

Doug Adams author of the book The Music of the Lord of the Rings will participate in book signings prior to the August 18 and 19 CSO Lord of the Rings—The Fellowship of the Ring performances at 6:45 p.m. in front of Ravinia Gifts.

Doug Adams is a Chicago-based musician and writer with roots in both classical and contemporary music, and is considered one of today’s leading film music advocates.

In 2001, Adams was invited by composer Howard Shore to follow his work on The Lord of the Rings trilogy. He attended the recording sessions in London and began regularly visiting the composer’s offices in New York. Impressed by the intricate nature of their collaboration, the two agreed to pursue a full book that would showcase the immense detail and beauty of the project. Shore stated at the time, "I have been reading Mr. Adams' articles and essays on film music for years. His writing on the subject is intelligent, accessible and insightful. His work is tremendously respected within the film community and he is the perfect author for this book."

Adams maintains a busy schedule as a performing musician, a writer, a composer/arranger and a public speaker. Recent appearances include the Kraków Film Music Festival in Poland; the Gala der Filmmusik in Vienna, Austria; Royal Albert Hall, the Royal Academy of Music, and the Royal College of Music in London; the Kultur- und Kongresszentrum Luzern in Switzerland; Robert DeNiro's Tribeca Film Festival and Radio City Music Hall in New York; the Cleveland Symphony; and lectures in Chicago, Toronto, Orlando, and Los Angeles.

Move over, Wagner—there’s another “Ring” in town, and with better special effects than Bayreuth could ever dream of. Straight from its triumphant presentations at Radio City Music Hall (“The music of Middle Earth soared through misty climes and clanked and rattled through Hadean depths at Radio City Music Hall”—New York Times) and the Lucerne Festival, this is the groundbreaking first installment of Peter Jackson’s Oscar-winning film trilogy based on J.R. Tolkien’s beloved novels as you’ve never seen or heard it before, with live symphonic accompaniment—similar to the CSO’s “Friday Night at the Movies” programs downtown. Written in the 1950s, The Lord of the Rings trilogy of novels first became a pop-culture phenomenon after a pirated paperback edition brought it to the attention of the 1960s counterculture, which identified with the story’s environmental concerns and embraced the the new genre of fantasy fiction. Told on an enormous scale, the story created an entire universe of men, elves, dwarves, sorcerers, monsters and epic battles that made a film adaptation virtually impossible—until film technology caught up with Tolkien’s imagination.

It was Peter Jackson who dared the impossible, remarkably turning out the three films of the trilogy—The Fellowship of the Ring (2001), The Two Towers (2002) and The Return of the King (2003)—in three successive years and amassing no fewer than 17 Oscars along the way, culminating in the awards for Best Director and Best Picture for The Return of the King. The complete, eye-popping first film of the trilogy will be shown on giant video screens, accompanied by the incomparable Chicago Symphony Orchestra performing the score that earned Howard Shore an Academy Award. (He would win for best score again for The Return of the King.) Middle Earth never sounded this good!