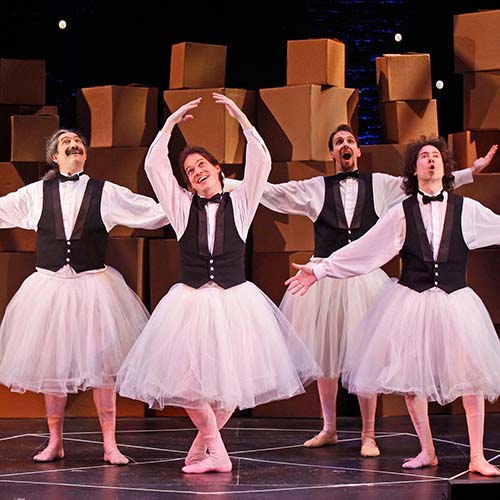 Expect the unexpected with the Flying Karamazov Brothers in 4PLAY. The self-proclaimed eccentric "lunatics" spice things up with a zany showcase filled with the astonishing juggling feats, laugh-out-loud comedy, and wild theatrics that have taken them to Broadway, television, and the big screen.

Formed at UC Santa Cruz in 1973, The Flying Karamazov Brothers’ wild and physically demanding antics won the ensemble a 1981 Obie Award for "Outstanding Achievement in the Off-Broadway and Off-Off Broadway Theatre" and a 2004 "Award of Excellence" from the International Jugglers’ Association. The group has appeared on the television sitcoms Seinfeld and Ellen and in the film The Jewel of the Nile. In February 2010, 4PLAY opened off-Broadway for the Karamazov's fourth time then continued an open-ended run at at the Minetta Lane Theatre into 2011. Later in 2011 FKB also performed "4PLAY" at El Teatro Gran Via in Madrid (they performed the show completely in Spanish). In 2012 FKB played Israel Arts Festival then an extended run at the Venetian Hotel in Las Vegas.

Wall Street Journal touts, “The Karamazovs deliver visual and verbal one-liners, all while creatively tossing about anything they can get their hands on!” The New York Times assures, "“As close to A sure thing as can be found onstage, 100 minutes of cleverness and comedy that go by in a flash!”