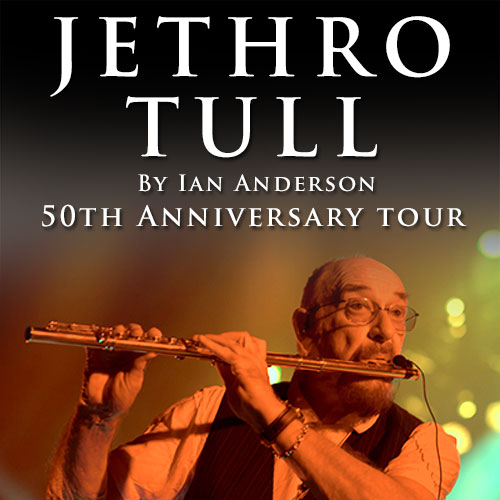 An Evening with Jethro Tull

* lawn ticket price increases $5 on the day of the concert

Jethro Tull brings its 50th-anniversary tour to Ravinia and to help them celebrate, anyone attending who also turned or will turn 50 in 2018 will be treated to a free ice cream cone from one of the new ice cream carts around the park when they show a driver’s license or other ID with date of birth at the box office.

It was on February 2, 1968, at the world-famous Marquee Club on Wardour Street that Jethro Tull first performed under that name. The group would go on to become one of the most successful and enduring bands of the era, selling over 60 million albums worldwide and entering the cultural collective consciousness along the way.

The band’s debut album, This Was, was released later that same year. Founder, frontman, and flutist Ian Anderson is credited with introducing the flute to rock as a frontline instrument, not to mention the codpiece!

Jethro Tull is one of the biggest selling progressive rock artists of all time, and its immense and diverse catalogue of work encompasses folk, blues, classical, and heavy rock. During its 50-year history, the band has performed over 3,000 concerts in more than 50 countries, playing more than 100 concerts each year. This 50th anniversary concert will feature a broad mix of material, some of it focusing on the earlier formative period through to the “heavy hitters” of the Tull catalogue from the albums This Was, Stand Up, Benefit, Aqualung, Thick as a Brick, Too Old to Rock ’n’ Roll: Too Young to Die!, Songs from the Wood, Heavy Horses, Crest of a Knave, and even a touch of Anderson’s Thick as a Brick 2 from 2012.