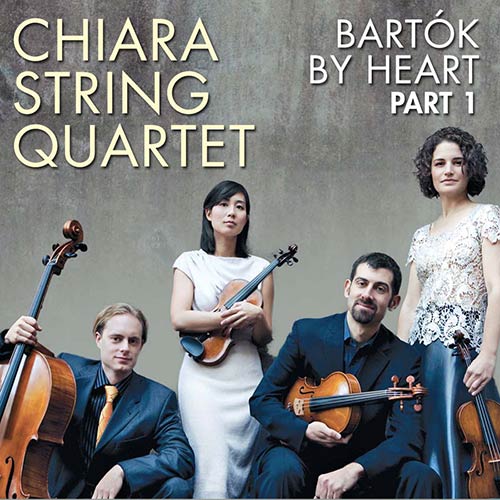 Dining Package: You can make the concert a complete evening out when you purchase the concert/dining package for $50 per person. This convenient package comes complete with dinner in the Freehling Room following the performance in Bennett Gordon Hall.

Renowned for bringing fresh excitement to traditional string quartet repertoire as well as for creating insightful interpretations of new music, the Chiara String Quartet captivates its audiences throughout the country. Lauded for its "highly virtuosic, edge-of-the-seat playing" (The Boston Globe), the quartet is currently Hixson-Lied Artist-in-Residence at the University of Nebraska-Lincoln and was the 2015-2016 quartet-in-residence at The Metropolitan Museum of Art.

Founded in 2000, the Chiara is moving forward by taking a cue from the past. Harkening back to a tradition that is centuries old and still common among soloists, the Chiara Quartet has adopted a new way of performing: from memory. The Chiara has recently recorded Bartók by Heart, a 2-CD set featuring Bartók’s six string quartets, played entirely from memory, slated for release on August 26, 2016 on Azica. The quartet’s latest album, Brahms by Heart, was released in March 2014 to critical acclaim.

The Chiara Quartet regularly performs in major concert halls across the country and has toured China, Korea, and Sweden. Recent collaborators include The Juilliard String Quartet, Joel Krosnick, Roger Tapping, Simone Dinnerstein, Norman Fischer, and Paul Katz. The Chiara has been committed to the creation of new music for string quartet since its inception, and has commissioned composers such as Gabriela Lena Frank, Jefferson Friedman, Nico Muhly, Robert Sirota.

The Chiara trained and taught at The Juilliard School, mentoring for two years with the Juilliard Quartet, as recipients of the Lisa Arnhold Quartet Residency. Chiara (key-ARE-uh) is an Italian word, meaning "clear, pure, or light."

Chiara String Quartet perform all of Bartóks string quartets over two concerts titled "Bartók By Heart" because they play without the aid of sheet music.