Welcome to RaviniaTV, a variety show webcast on our Youtube channel. Our first season aired during the summer of 2020, and every episode is viewable below. Subscribe to our channel and Please "stay tuned" to this page for news on future episodes and seasons of the series. 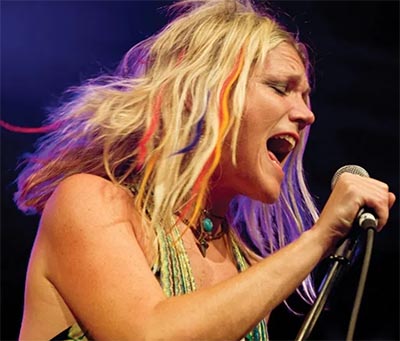 Musical guests make special appearances on Ravinia’s main stage (or other venues closer to home) to share performances with the audiences they just as much wish they could be with in person. Chicago’s Own segments put the spotlight on local music makers, and Ravinia from Home features artists performing from their living rooms.

TOPical5
Chicago radio personalities count down their top five songs related to our reality. Listen to the complete playlist of all the TOPical 5 selections on Spotify.

Zoom in on Highland Park
Get to know the movers and shakers of Ravinia’s hometown.

Best Medicine
We're all facing serious situations, but there's still comedy all around us.

Blast from the Past
Clips from Ravinia’s archives show off memorable moments that fans might have missed.

Ravinia is a year-round organization with a nonprofit mission that extends beyond the stage. Our park may be dark this summer, but in this year with no ticket revenue, the generous support of our donors gives us the means to maintain our commitment to the students and families our Reach Teach Play music education programs serve, brighten the community, and bring the rejuvenating power of music to so many during this shared crisis. We are excited for the possibilities the future brings to the festival and the people we serve. Light the way with us.

Other Virtual Projects from Ravinia

Even without “normal” classrooms to meet in, our Reach Teach Play music education instructors and students are keeping music alive in their hearts and homes through fun instructional videos! See a sampling below.

RSMI From The Vault

Exclusive recordings of performances from Ravinia's Steans Music Institute. Videos are available from RSMI’s three summer programs, including original charts from unique jazz combos, chamber music featuring piano and strings, and collections of songs from classical to musical theater. See a sampling below.

The September 25 season finale is a supersized, hourlong episode featuring an exclusive interview and introduction to Ravinia’s new President & CEO, Jeffrey P. Haydon, who shares the personal and professional experiences that he’s excited to carry into the role, as well as a wide variety of exclusive performances recorded remotely and at the park. The episode will also bring viewers a “TOPical 5” countdown of R&B and hip-hop albums from Matt McGill of 1690AM WVON and the latest developments at our front gate with The Comic Thread, plus a chat with executives from Ravinia supporters Abbott, Allstate, and BMO, who share the importance of their philanthropic work and explain how their partnership with the festival lives up to their missions.

A “Ravinia from Home” feature includes singer and keyboardist Dennis DeYoung, formerly of Styx, playing a song he wrote for the band 20 years ago that carries additional meaning today, and the 4 Chairs Theatre Virtual Choir shares a rendition of “The Way We Were.” The Danish klezmer band Mames Babegenush also brings its signature sound. Social distance is both the situation and the subject of new choreography by Venetia Stifler on Concert Dance Inc. that receives its world premiere at the Kohl Kaplan Fountain, which has been dancing all summer at the grand entrance to the festival. Ravinia’s Bennett Gordon Hall is visited by Chicago Symphony Orchestra principal clarinetist Stephen Williamson and concertmaster Robert Chen—with his family, forming the Chen Quartet—for a movement of Mozart, and Renaldo Domino & The Heavy Sounds close the show from the Pavilion.

The September 18 episode is a virtual Fiesta Ravinia! Freehling Room chef Juan Carlos Medina shares tips for making perfect elotes (street corn) like at the annual celebration of Mexico’s Independence, and comedian Joey Villagomez chats taking the Fiesta stage and his highlights since. Telemundo's Maria Elena Ponticiello brings us her top five Latin crossover artists (and one essential extra!), and exclusive performances from pianist Jorge Federico Osorio and Sones de México highlight the wealth of artistry that our neighbor nation has given the world.

A “Zoom in on Highland Park” explores the City’s connection to Puerto Vallarta, Mexico, through its Sister Cities Foundation, promoting the bridging of cultures, educational exchanges, and opportunities in the arts. Plus, one of Ravinia's Reach Teach Play teaching artists shares a favorite classroom song that gets young Music Discovery Program students engaged while singing along.

The September 11 episode features an exclusive interview with Welz Kauffman, who departs Ravinia after 20 years as the festival’s President and CEO this month, leaving a legacy of expanded and diversified programming as well as major infrastructure improvements. Echoing numerous occasions during his tenure, a series of exclusive performances see Kauffman on the piano alongside musical theater star Hollis Resnik as well as soprano Michelle Areyzaga on the Bennett Gordon Hall stage.

The episode will also bring a spotlight on actor/comedian Tom Dreesen, who went from shining shoes in Illinois bars to opening for Frank Sinatra at clubs and guesting on “The Tonight Show Starring Johnny Carson,” and a “Zoom in on Highland Park” explores the in-the-moment, artistic doodles of nationally published editorial cartoonist Jonathan Plotkin. Acclaimed tenor Rodrick Dixon and soprano Alfreda Burke close the show with an exclusive performance of musical theater favorites on the festival’s stage.

The September 4 episode features composer Michael Salvatori, best known for his “Halo” and “Destiny” video game soundtracks, sharing pivotal moments from his career in an exclusive interview and performance, as well as the importance of exposing children to instruments and all types of music as he visits the “Ravinia Festival Music Makers” exhibit at Kohl Children’s Museum. At the top of the show, longtime Ravinia stage tech Norman Krueger shares his experience helming the soundboard for a wide variety of Ravinia concerts.

The episode also brings a “TOPical 5” countdown of the top five summer, “windows-down” throwback songs of all time, picked and presented by Jay Styles of SHE 100.3 FM, as well as the fourth vignette in the recurring comedy sketch by The Comic Thread and Bitter Jester Studios, exclusive performances from home by both the crossover string trio Time for Three and multidisciplinary pianist Dan Tepfer, and a “Zoom in on Highland Park” exploring Mark Hersch’s rephotography that has developed from one scene of Chicago’s lakefront to more than 300 images across 13 cities (and six books!).

The August 28 episode is headlined by The Blooze Brothers, who take the “Chicago’s Own” spotlight for an exclusive mini-concert on the festival’s main stage, and at the top of the show is an interview with Jennifer Ringo, who shares her singing and diction expertise, as well as her approach to connecting with language, on the faculty of Ravinia’s Steans Music Institute.

The episode will also bring viewers a “TOPical 5” countdown of the top 5 ladies of soul, picked and presented by Samantha Thomas of WVON 1690 AM, as well as the third part of a recurring comedy sketch by The Comic Thread and Bitter Jester Studios, featuring the WGN Midday News crew as special guests, and an exclusive performance from home by acclaimed pianist Lara Downes.

A spotlight on Ravinia scholarship recipient Joshua Redfield and 100 Black Men of Chicago showcases one of the organizations that the festival works with to create access to music and education alongside its own Reach Teach Play programs.

The August 21 episode features an exclusive interview and a special performance with distinguished soprano Nicole Cabell and composer Ricky Ian Gordon. The episode will also bring viewers a “TOPical 5” countdown of the top 5 duos of all time, picked and presented by Chris Petlak and Lisa Allen of 101.9 THE MIX, as well as a memorial of the longtime Ravinia-favorite pianist Leon Fleisher and the second part of a recurring comedy sketch by The Comic Thread, which was highlighted on the recent WGN Midday News story about RaviniaTV.

A “Chicago’s Own” spotlight on Jim Peterik of The Ides of March serves up an exclusive interview in which he talks about finding success with the band and the call he received from Sylvester Stallone that led him to write his biggest hit with Survivor, “Eye of the Tiger.” Peterik and The Ides of March close the show with a mini-concert on the festival’s main stage.

This August 14 episode features an exclusive interview with distinguished composer Jake Heggie about the immediacy of his highly successful operas, including his upcoming project Intelligence, an opera about women spies in the South during the Civil War. A “Chicago’s Own” spotlight on Ralph Covert of Ralph’s World serves up both an exclusive interview and a special performance with his indie-rock group, The Bad Examples, on the festival’s main stage.

The episode will also bring viewers a “TOPical 5” countdown of the top 5 tracks to dance on top of a picnic cooler to this summer, picked and presented by Sherman & Tingle of 97.1 FM The Drive, and a “Zoom in on Highland Park” features the Midwest Young Artists Conservatory, the largest youth music ensemble program in the Midwest. Violinist Isis Burgos shares her seven years’ experience and how MYA has helped her become a better musician. Other segments include a comedy sketch by the Comic Thread and Bitter Jester Studio, plus a special performance by acclaimed pianist Richard Glazier.

The August 7 episode includes a special tribute to Janis Joplin for the 50th anniversary of her first and only show at Ravinia, on August 5, 1970. Terry Talbot of the former Chicagoland band Mason Proffit, which opened for Joplin on that date, recalls his experience backstage and during the concert in an exclusive interview, and he also shares some of the music he makes now in a performance from home. This special episode will also bring viewers a “TOPical 5” countdown of top songs recorded by artists in the ill-fated “27 Club,” picked and presented by 93XRT’s Lin Brehmer.

In an extensive “Chicago’s Own” segment, Cathy Richardson, lead singer of Jefferson Starship, reflects on her many intersections with Joplin’s music throughout her music career, including touring with Big Brother & The Holding Company and starring in the off-Broadway show “Love, Janis.” Together with her local Cathy Richardson Band, the singer will also perform some of Joplin’s greatest hits to commemorate the special anniversary.

The episode also brings a “TOPical 5” countdown of the top gay anthems as picked and presented by Ellen Miller and Scott Duff of WCPT 820’s “Out Chicago” show. A “Zoom in on Highland Park” features Ravinia’s Director of Private Events and Hospitality, Hilary Saurer, sharing tips on hosting fun parties and events over video conferences while in quarantine. Other segments include a comedy sketch by Jessica Redish and an original song by Ralph Covert of Ralph’s World to help kids time their handwashing.

The July 24 episode is a European getaway with exclusive performances by Chicago’s own hot club jazz quintet Bowmanville and mezzo Michelle DeYoung, as well as an itinerary of voices to lift up and sing out today.

The July 17 episode adds a dose of laughter from comedian Keith Ross Nelson alongside exclusive performances from Andrew Bird and a special stage appearance by local musician Kevin Pollack and his band.

The July 10 episode includes a triple feature from Michelle Areyzaga and then—Ravinia CEO Welz Kauffman, an experience with guitarist Reentko, as well as virtual visits with the Ravinia Jazz Scholars and our Chief Conductor & Curator, Marin Alsop.

The July 3 series premiere features jazz legend Ramsey Lewis performing from his living room, as well as one of the most successful rock bands of all time, Chicago, sharing exclusive performances of songs recorded from a concert last year.