First opened on August 15, 1904, Ravinia remains the oldest and most programmatically diverse music festival in North America, attracting about 600,000 guests to over 120 events each year. It was conceived as a high-end amusement park—complete with music pavilion, dance hall, baseball stadium, theater, and electric swing—by the A.C. Frost Company to lure Chicagoans to ride its fledgling Chicago and Milwaukee Electric Railroad to a respite in the woods, far from the heat and smells of a city known as the “hog butcher to the world.” Trains still stop at Ravinia’s historic entrance today, serviced by the Metra Union Pacific North line, making it the only private train stop left in Illinois.

As Ravinia grew in popularity, summer cottages popped up nearby, and when the train company went bust, Ravinia continued to thrive under the leadership of a group of North Shore philanthropists who created the Ravinia Company, headed by Louis Eckstein. Today Ravinia operates as a self-owned nonprofit—the Ravinia Festival Association—still overseen by a volunteer board of business and community leaders, but now managed by President & CEO Jeffrey P. Haydon and a year-round professional staff of 55, with support from its active and insightful Women’s Board (established in 1964) and its Associates Board of young movers and shakers (established in 1988).

From 1919 through 1931, Ravinia was known as the “summer opera capital of the world,” welcoming to its stage the most-celebrated singers from Europe who sailed to America to perform at the Met and were in no hurry to make that arduous return voyage. Even during this period, the railway proved crucial the festival’s success, and many great operas were truncated so audiences would not miss the last train of the evening. Ravinia shuttered for four years during the Great Depression, reopening in 1936 with a greater emphasis on symphonic music, hosting the first formal summer residency of the Chicago Symphony Orchestra, an enviable relationship that exists to this day. In 1938, Benny Goodman made headlines by breaking racial barriers, performing at Ravinia with an integrated band. 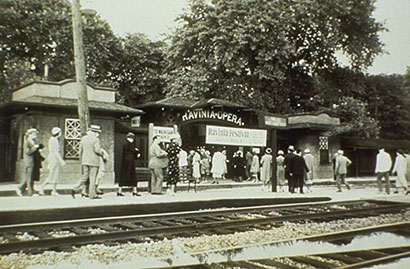 Central to Ravinia’s mission is its development of new artists and new audiences. For five decades, Ravinia has made music more accessible through education programs now called Reach Teach Play®. These programs—including Sistema Ravinia, which creates and maintains student orchestras in elementary schools without music programs of their own—serve 75,000 people each year in Lake and Cook Counties. The Jazz Mentors and Scholars, one of the longest-running RTP programs, teams the best Chicago Public High School musicians with the city’s jazz giants to create a real, working ensemble. Ravinia’s Steans Music Institute is an on-campus summer conservatory, where 60 of the world’s top young professional musicians receive fully paid fellowships to train and perform with the artists who headline the festival’s stages. 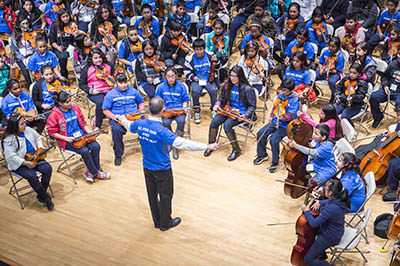 In addition to its cultural contributions to the Chicago area, Ravinia is also an economic engine for its hometown of Highland Park, attracting visitors to the area, providing jobs (especially for young people just entering the workforce, many of whom graduated right from our Pavilion stage), supplementing the salaries of first responders, sharing revenue with the city, providing positive publicity, and supporting many worthwhile causes. Just more than half of the revenue it takes to run Ravinia each year comes from ticket sales, and the rest is contributed by corporate and private sponsors.